What Is Cancel Culture And How Your Brand Can Avoid It

What Is Cancel Culture And How Can Your Brand Avoid It?

What is #Cancel Culture?

Cancel culture, also known as call-out culture, describes the modern grassroots movement of calling attention to questionable or negative actions or opinions by a brand or public figure. As social movements like #MeToo and Black Lives Matter have shed light on brands and public figures that many people do not agree with.

‘Cancelling’ happens when people stop supporting a brand or public figure as a result of an action or opinion held by the brand or public figure. Cancel Culture holds those in positions of power accountable for their actions and words and the easiest ways for consumers to take action against a brand is to speak with their wallets 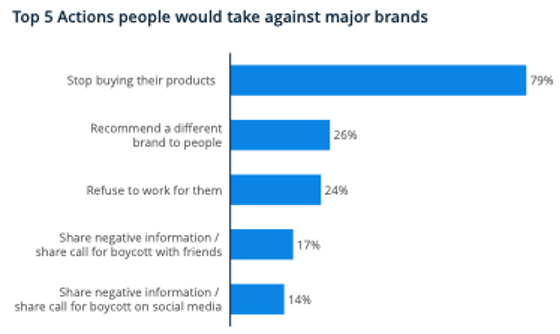 Cancelling a brand can take the form of

Businesses aren’t the only brands at risk of being cancelled. Personal brands, such as politicians and celebrates are also scrutinized in Cancel Culture. Getting cancelled is not uncommon, Statista found than one in every two consumers took some sort of cancelling ‘action’ against a brand in the last year, most of which happened online. [ii].

Many consumers – especially those in Gen Z- are calling for brands to be cancelled. Social media has added an increased dynamic into the mix as people share calls to action against a brand or public figure.

Some facts to note:

Statista found that Twitter has the highest share of users taking actions against brands, followed by Tik Tok.

How To Avoid The Risk Of Being Cancelled

To avoid getting cancelled, brands should:

If your brand does end up facing public backlash, think about your values and let your actions speak for themselves. Connect with your audience and apologize for any wrongdoing. Winning back consumers means listening to the public and making meaningful changes to rectify mistakes. All hope is not lost, Americans tend to boycott a brand first, but are also more likely to give that brand a second chance[vii]. According to Statista, consumers will go back to a brand they have boycotted if they believe the brand is making a change in its practices.