Christine Faulhaber has been a force in marketing and public relations for three decades. In 2001, she launched award-winning Faulhaber Communications, a full-service PR and digital marketing agency. Over the past 20 years, she has acted as agency leader, mentor, innovator and led her dynamic team on strategic work in sectors such as beauty, cannabis, fashion, retail, design and automotive.

Christine is an official member of the Forbes Agency Council, and is recognized as one of Canada’s Top Female Entrepreneurs and has been awarded rankings on the W100, Profit 500 and Growth 500 lists. A forward-thinking entrepreneur, she is a sought-after speaker and has contributed to WomeninPR, Global PR Summit Canada, The Kit Conference and at various Universities. Christine mentors many aspiring businesspersons through the TFI (Toronto Fashion Incubator), THE FORUM, Monday Girl and in her role as Program Advisory Committee for Humber College’s Fashion Arts and Business Diploma. Mother of two and an avid globe trotter, she supports KIVA, a non-profit that provides low-income entrepreneurs with micro loans around the globe.

Dedicated to female empowerment and diversity, she champions financial feminists through The51 and provides senior leadership through FAULHABER’s FCONSULTS platform. A Toronto Metropolitan University (TMU) alumni, Christine dedicated the Faulhaber Communications Award to TMU, a 20-year annual bursary commitment directed toward a female BIPOC student with aspirations to become a senior leader in communications. As part of her commitment to building the next generation of women leaders, Christine recently appointed Lexi Pathak as President and leader of the day-to-day operations at the agency. Through this promotion Christine has provided a platform for implementation of new ideas and initiatives, including 1% for the Planet and DE&I commitments. 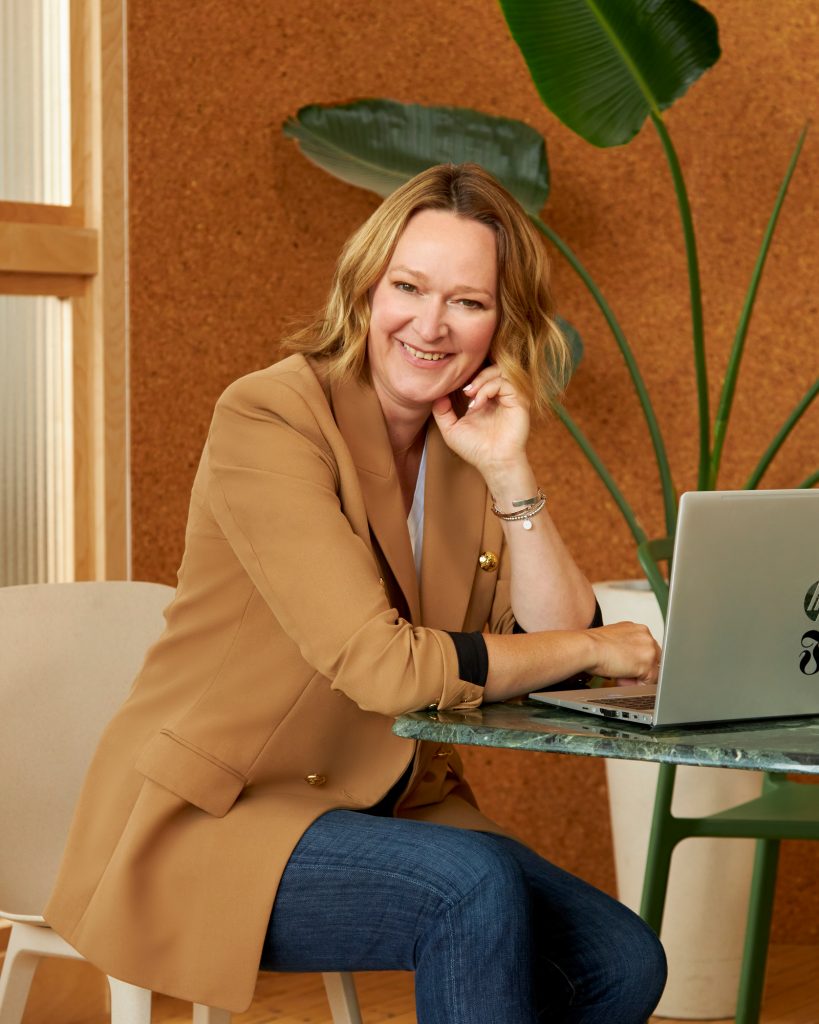 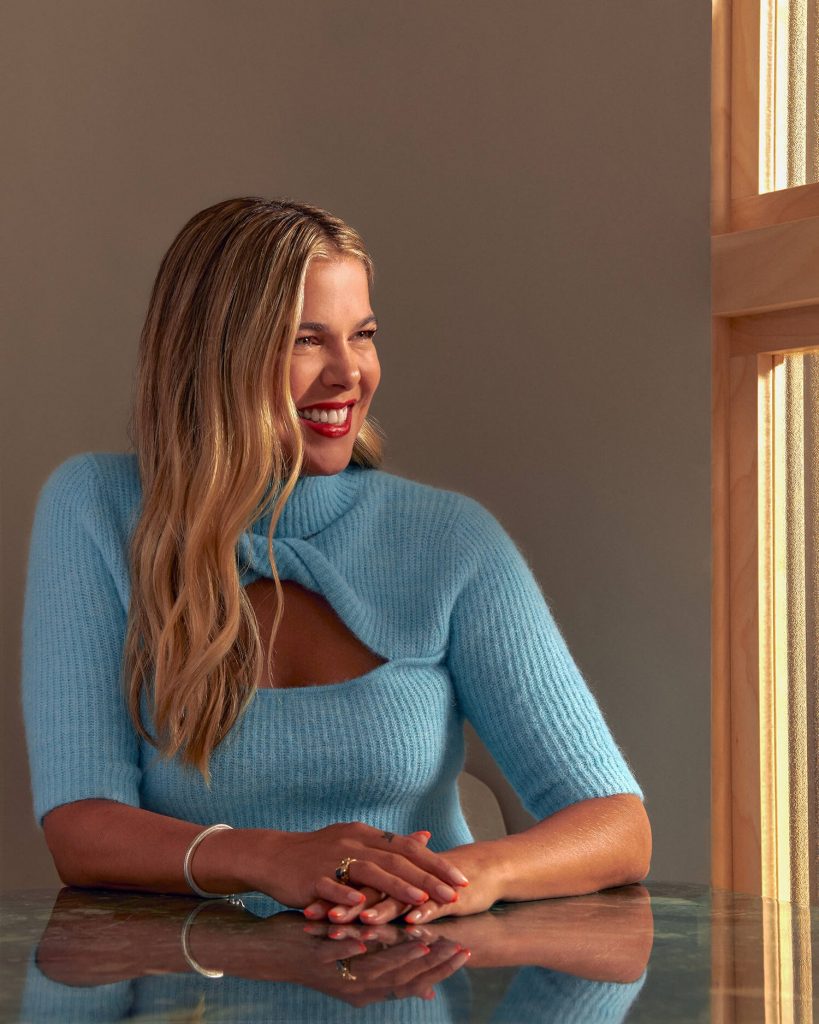 Outcome-obsessed Lexi is always asking “why?”, which fuels her passion for coming up with ideas, and if you ask her for one, she will likely come back with 10. It’s no surprise her top strength is ideation, driven by a fascination with ideas and coming up with new perspectives. With 15+ years of communications experience and a background in journalism, Lexi lends her deep expertise as a mentor for Monday Girl and connecting brands with effective and meaningful ways to share their stories.

As a mother of three young children, Lexi is a master multi-tasker. She finds balance in downward dog and spending time in nature.

With over a decade of FAULHABER experience, Lindsay is a force on the management team. As Vice President, Lindsay uses her deep understanding of our values to mentor the team on account management. She applies her steely determination to developing customized strategies that meet client challenges.

Lindsay is a lover of all things creative and iridescent. Her passion for international design has positioned her as our industry expert, running most of our design accounts.

Lindsay’s strengths are in Influencing and Relationships. She is an Activator, Maximizer and Communicator with Harmony and Developer strengths. 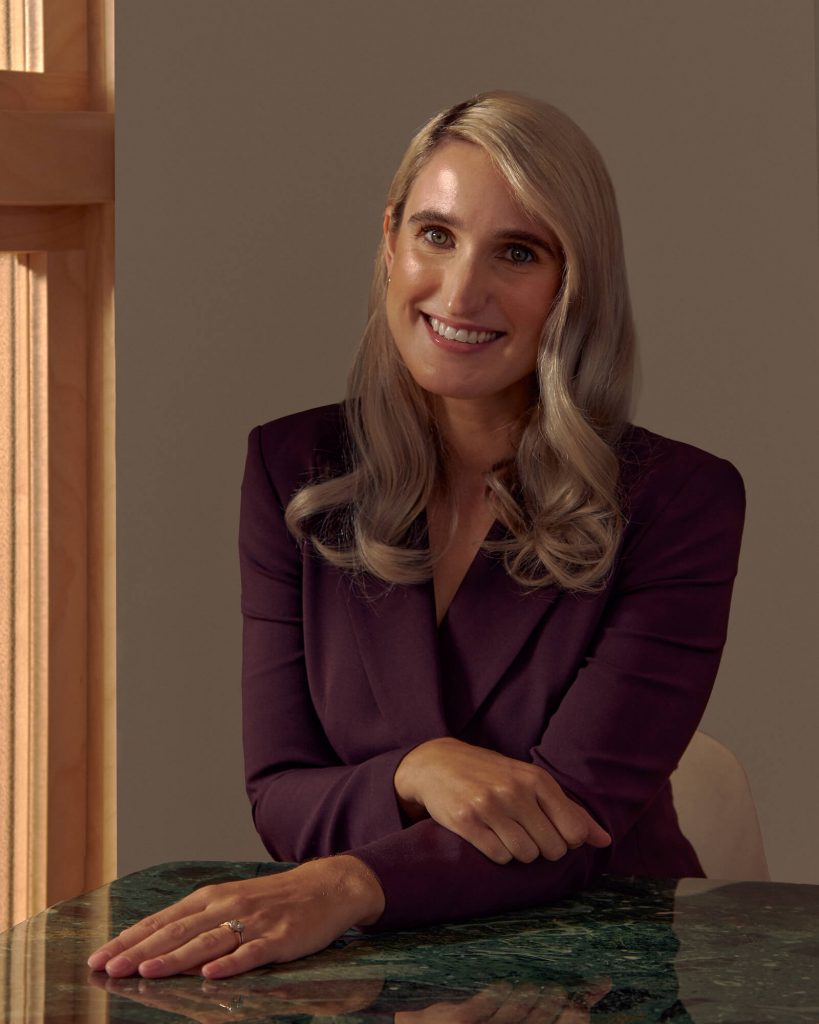 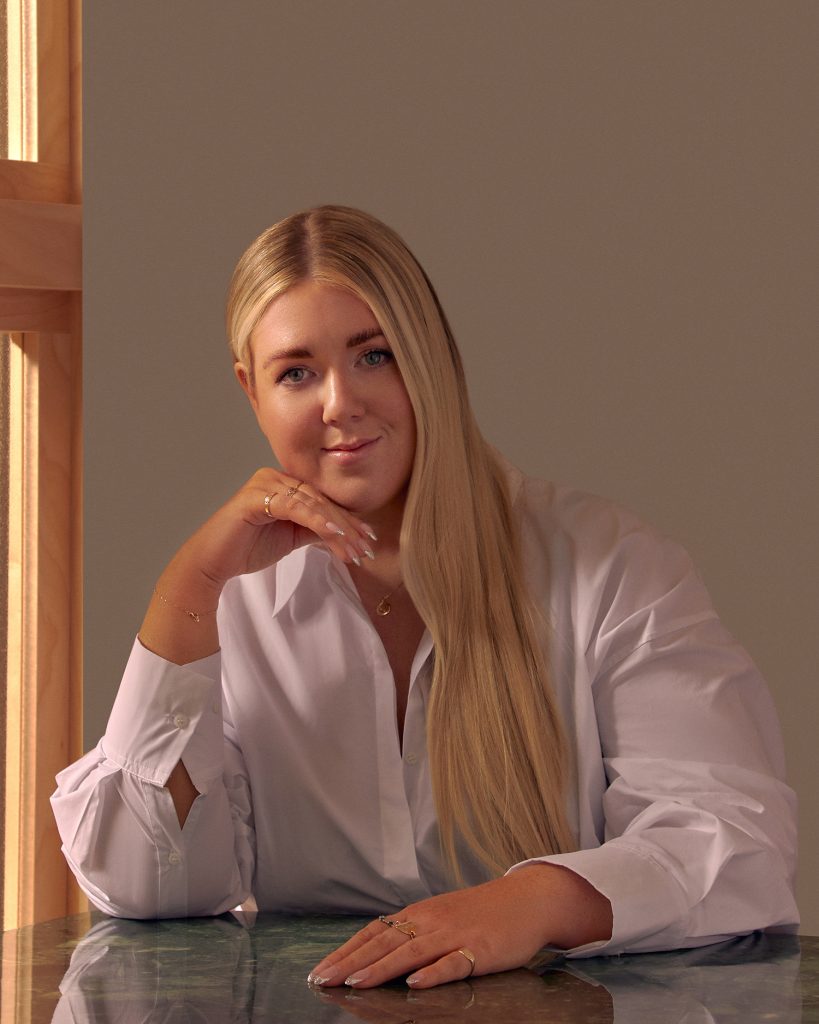 As Vice President, Megan is responsible for driving the beauty sector at the agency forward, building impeccable relationships between the media/influencer landscape and the agency’s brands, as well as sharing industry insights with clients around the globe.

Megan is passionate about creating and enjoying experiences, personally and professionally. She values living in the moment and capturing memories over acquiring objects and loves sharing experiences with friends and family.

Megan’s strengths lay across Executing, Strategic and Relationships categories. She puts them to use in each facet of her work at the agency. They are Achiever, Arranger, Empathy, Relator and Ideation.

Andra Taylor is passionate about helping small and medium-sized business owners and entrepreneurs reach their full potential, which is why she co-founded REFINE.

Andra has 15 years of experience in finance, strategy and management at the senior level. Prior to founding REFINE, she was VP Finance of a construction and real-estate conglomerate, where she managed a portfolio of $50 M+.

Andra advises entrepreneurs and business owners in various industries, with a focus on strategic finance & planning, organizational capacity, sustainability and growth, all aimed at improving her clients’ bottom line, while pursuing a steady and healthy growth. 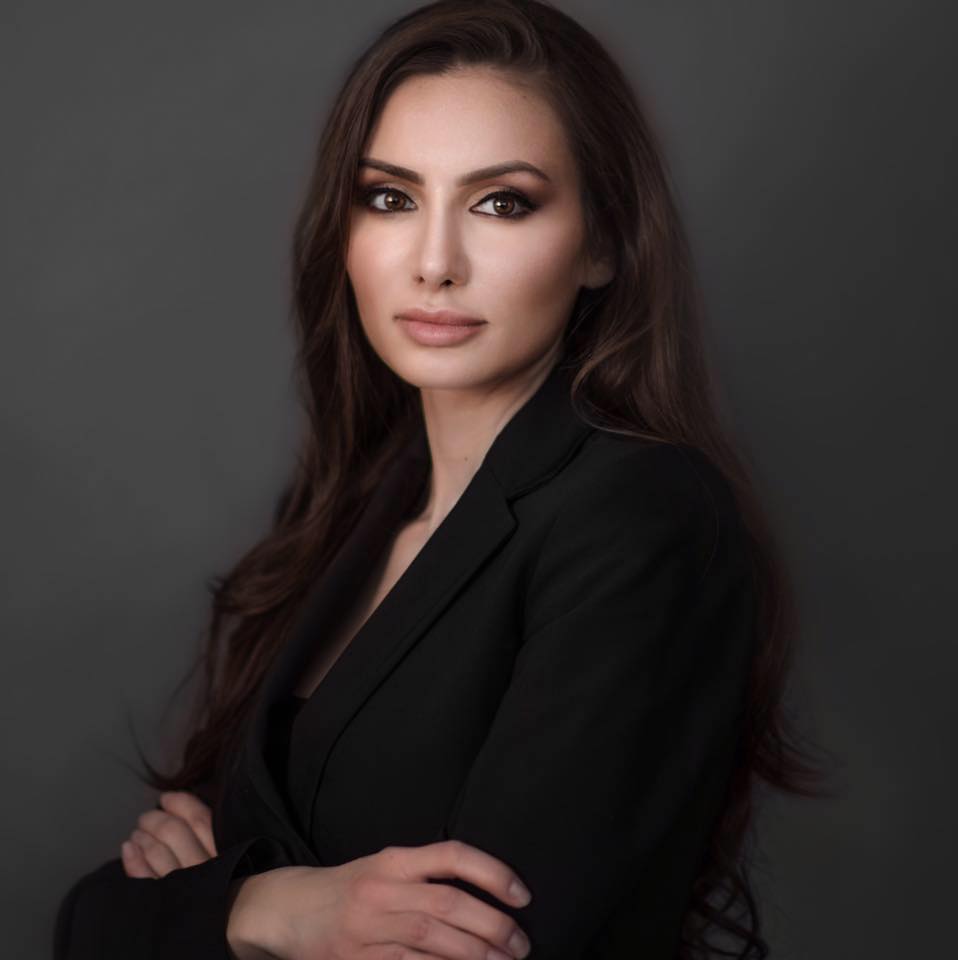 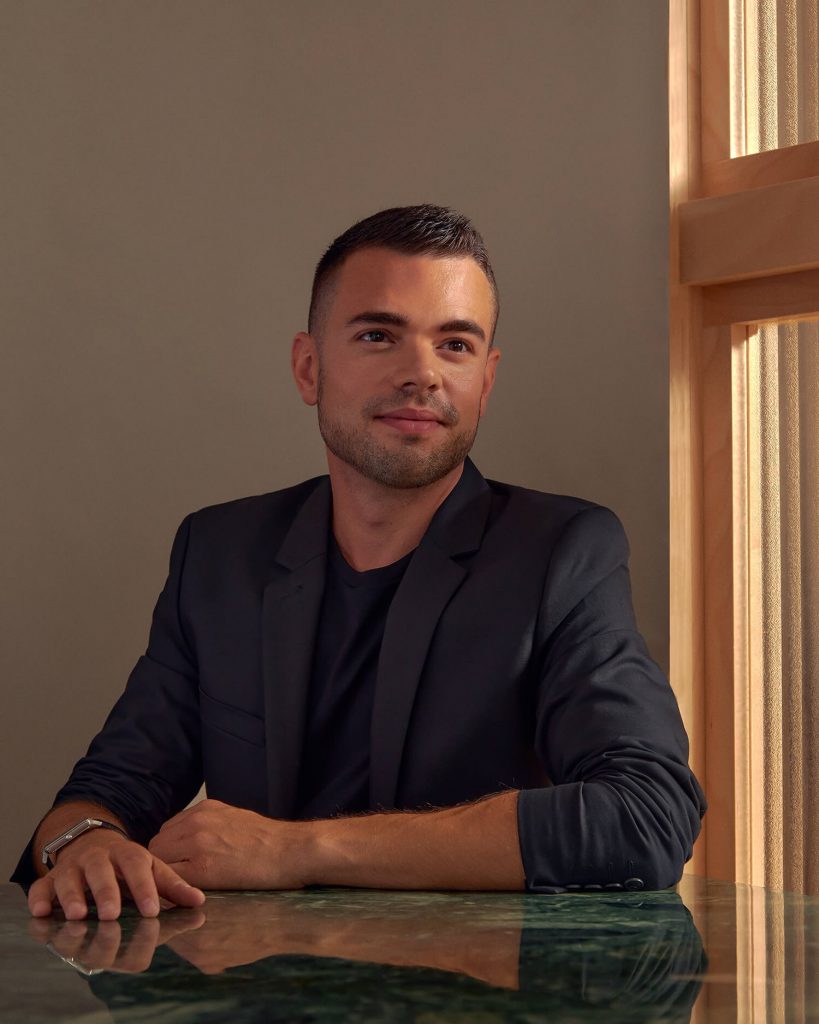 In his role as Director, Quebec, Kevin manages national client accounts in the Fashion, Home Décor, Appliances, Design and Real Estate sectors, while leading Quebec market strategy across all clients.

Kevin is a natural leader and truly believes there is no “I” in team. He is passionate about art and design, along with maintaining a healthy lifestyle – physically and mentally.

Kevin thrives in creating structure in chaos and offering strategic solutions and generating big ideas for his clients. His five key strengths are Discipline, Achiever, Responsibility, Strategic and Significance.

As Senior Manager, Marketing & Operations, Kayla is passionate about making connections and taking on new challenges. Her knack for building relationships and industry knowledge make her an expert and resource in the agency.

Kayla finds true joy in organization. From out-of-town getaways (personally and professionally) to processes that push the agency forward, Kayla’s attention to detail is something to be marveled at. Her tiny dog Pippa is an adorable part of the FAULHABER team. Kayla is a constant teacher. She builds relationships with all team members and works to help develop their skills and teach them new things.

It is no surprise that most of Kayla’s strengths are in the Relationships category – Developer, Connectedness, Empathy, Positivity and Responsibility. 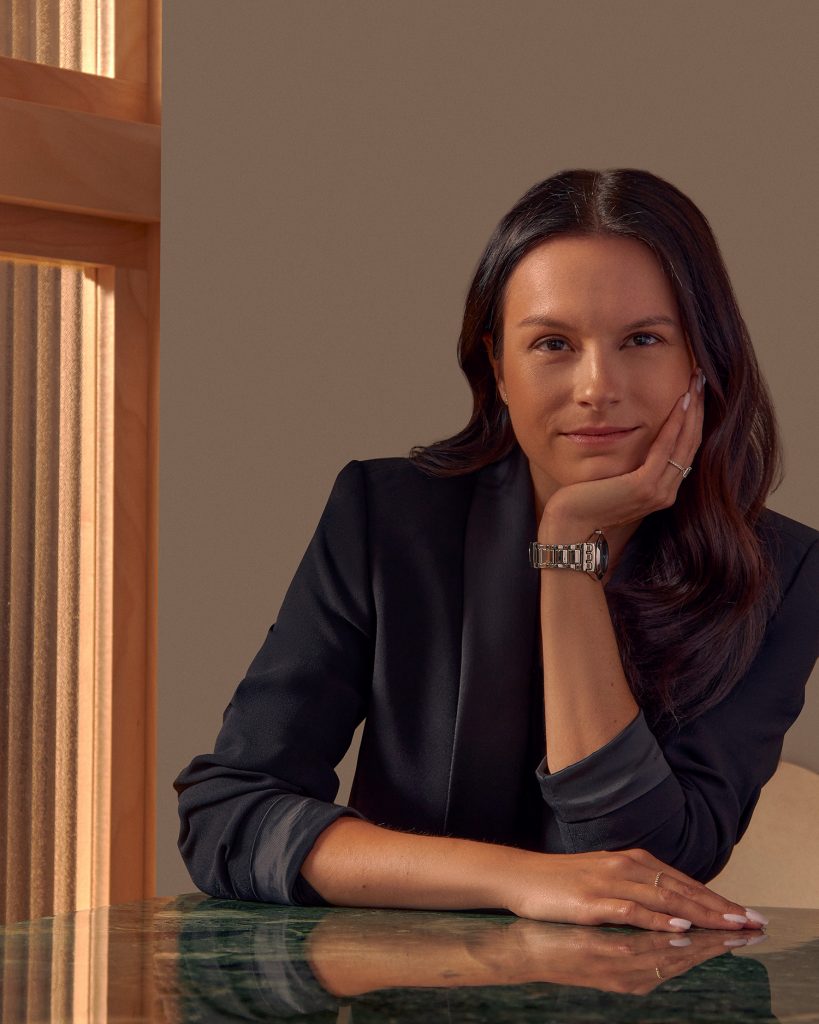 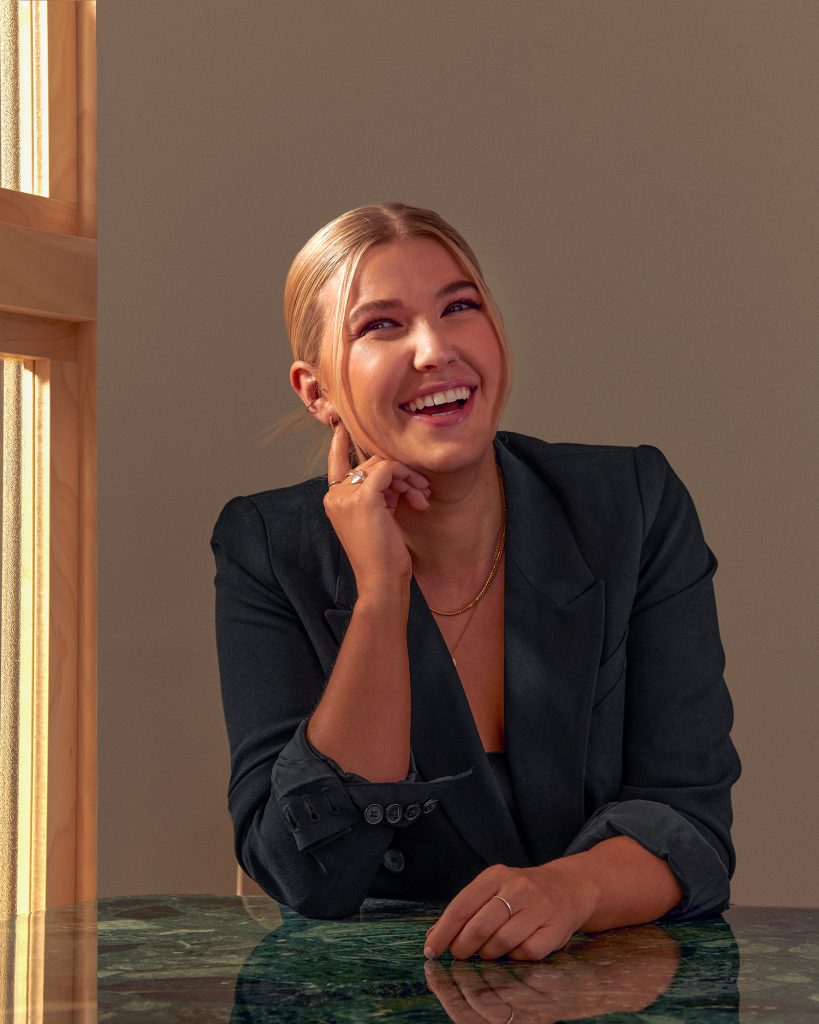 As Senior Manager, Margot is responsible for contributing to strategic development, overseeing the execution of all account activity and acting as the day-to-day contact from her clients.

Lover of all things beauty, Margot has established her career as the lead executer for both mass and prestige beauty brands. With a genuine passion for the beauty industry, Margot is a true advocate for her clients.

Margot’s strengths lay across Executing and Relationships categories. She truly embodies these strengths with not only her clients, but also media and influencers across Canada.  They are Achiever, Arranger, Empathy, Relator and Harmony.

Michelle Nkedi is a finance professional with a career spanning 6 years in the advertising and retail sectors. She began her career in the casual dining industry working with small to medium-sized companies experiencing rapid growth and looking for ways to streamline their transactional finance processes. While working full time, Michelle also studied part-time at the Open University in the UK attaining a BSc. in Economics & Mathematical Sciences. After completing her degree, she crossed over to project accounting within the digital advertising and marketing space with more of a focus on clients, financial reporting, and analysis.

Growing up in the diverse city of London, UK introduced Michelle to people from all walks of life as well as different cultures and customs. Having the ability to travel and work in different countries, she believes that organizations with diversity and inclusion at the forefront are built to thrive. She is also a certified yoga teacher in Vinyasa and Rocket, when she is not working she is either practicing or teaching. 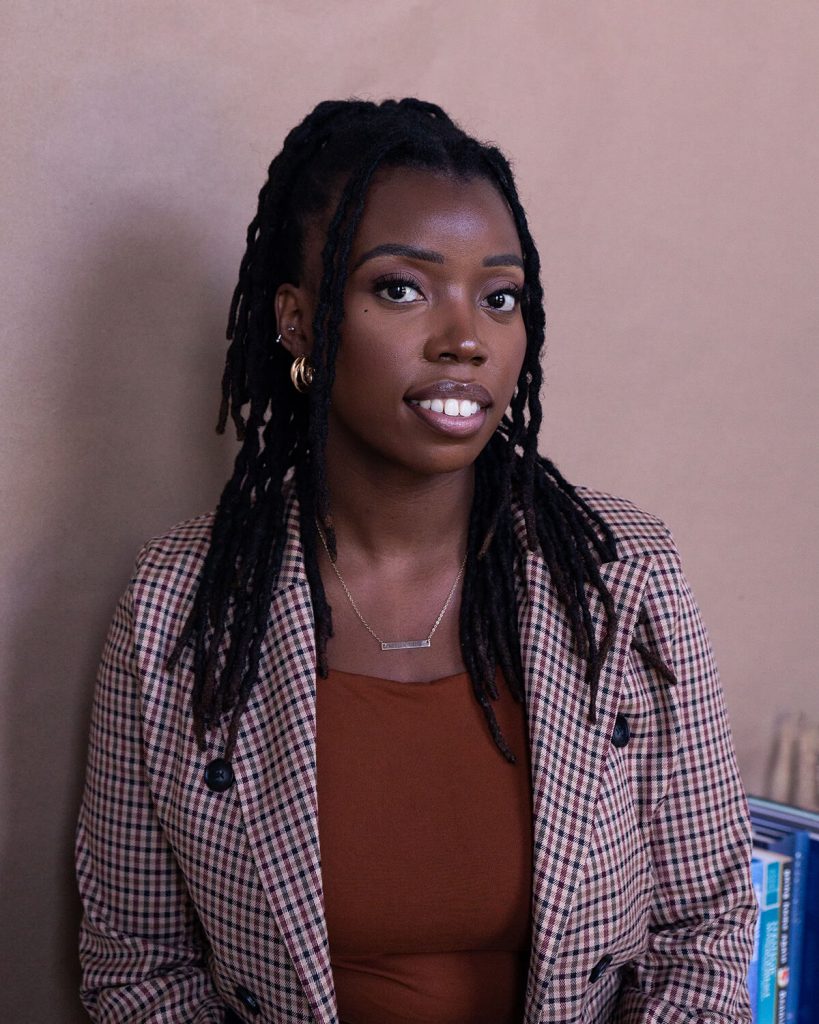 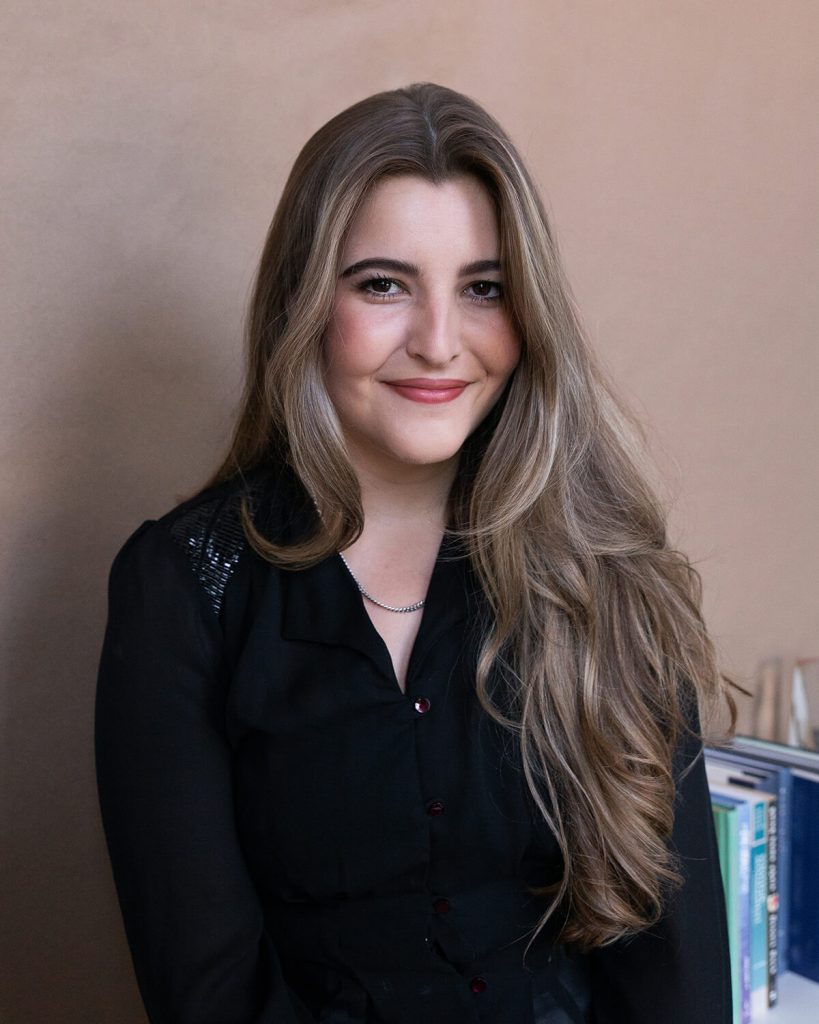 As Senior Account Executive, Kyla works across industries, including retail, beauty and corporate. With a diverse background in publishing and higher education, Kyla’s experience writing and publishing sponsored and editorial content has made her a media landscape expert and sharp writer with great attention to detail.

Kyla has a passion for feminist values, writing her master’s research paper on sex product marketing and sex-positive feminism. With a keen eye for emerging trends and cultural moments, she is always on the lookout for branded opportunities.

As Account Executive, Emma works across various fashion and beauty accounts supporting campaigns and launches, media and influencer relations, partnerships and events. With a background in customer service, Emma is committed to creating exceptional client experiences and takes a results-driven approach to all her work.

As a vegetarian of nine years, Emma is passionate about plant-based eating and loves spending her free time trying out new recipes and cooking for her friends and family. 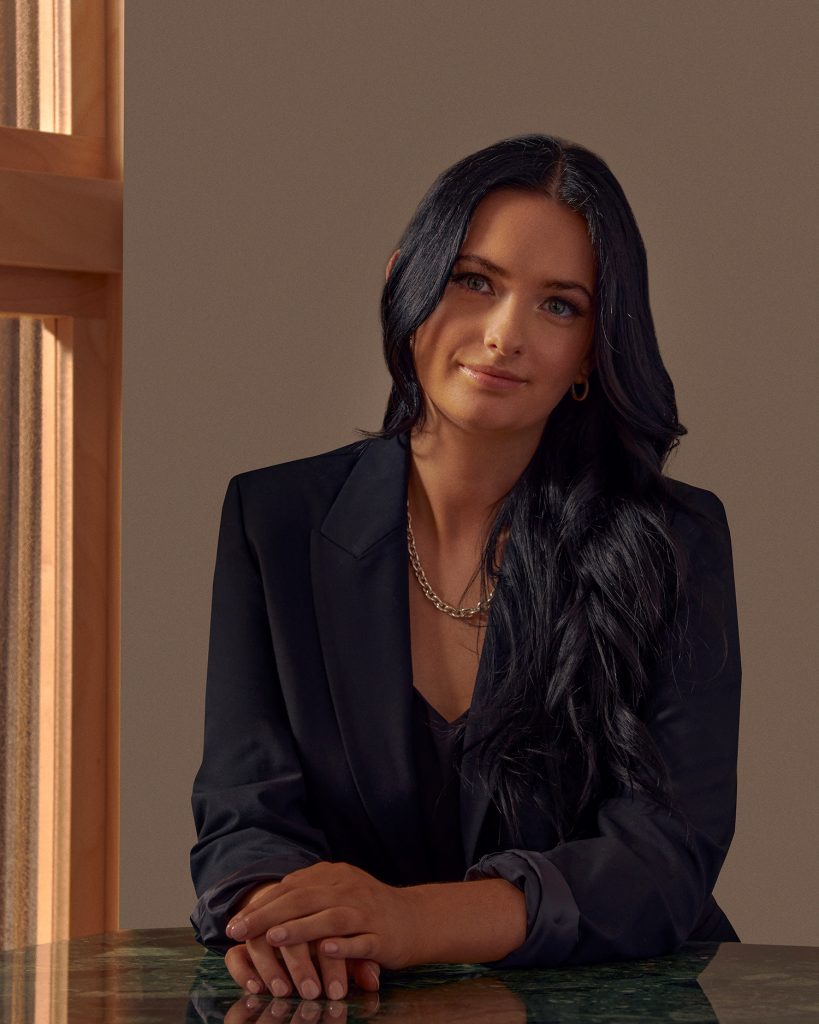 As Quebec-based Account Executive, Frédérique brings her French market expertise to media and influencer relations, strategic partnerships and event management across FAULHABER clients. She is committed to exceeding client expectations and bringing a brand’s vision to life.

Frédérique loves everything culture related. Whether it’s discovering new music, reading, watching new movies or visiting new expos at museums, there is always something new to discover for her. She also considers herself a real ‘foodie’, always looking to try the latest restaurants in Montréal.

Frédérique’s strengths are all about Relationship Building and Strategic Thinking. She uses her Developer, Empathy, Positivity, Ideation and Input strengths to create impactful strategies in the Québec market and across Canada.

As an Account Executive on the Real Estate team, Natalie supports the initiatives and strategies of client accounts to help produce results-oriented integrated campaigns, leveraging both traditional PR and marketing tactics and digital thinking.

A member of Gen Z, Natalie prides herself on always being in the know when it comes to the latest in news and trends. Using her timely knowledge of the media landscape, she is always one step ahead of the next big thing.

Natalie’s top strengths include Futuristic, Achiever, Empathy, Learner, and Restorative. She ensures her strengths are present in her every day work in order to help deliver the best results for her clients. 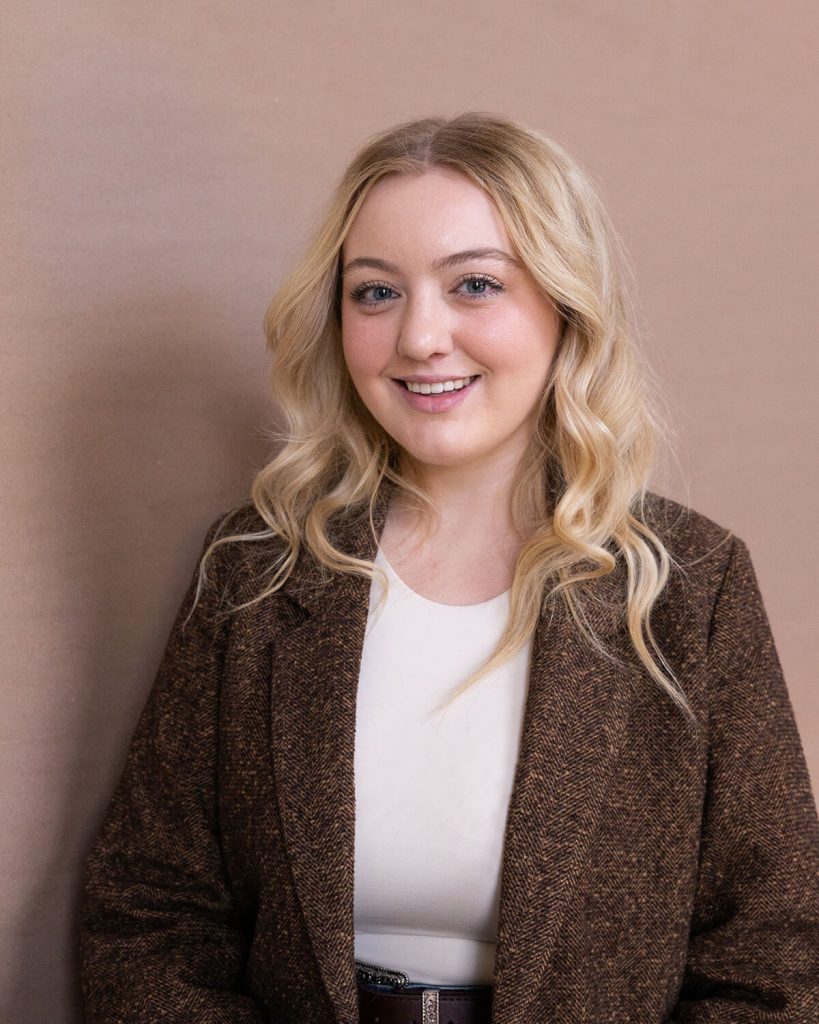 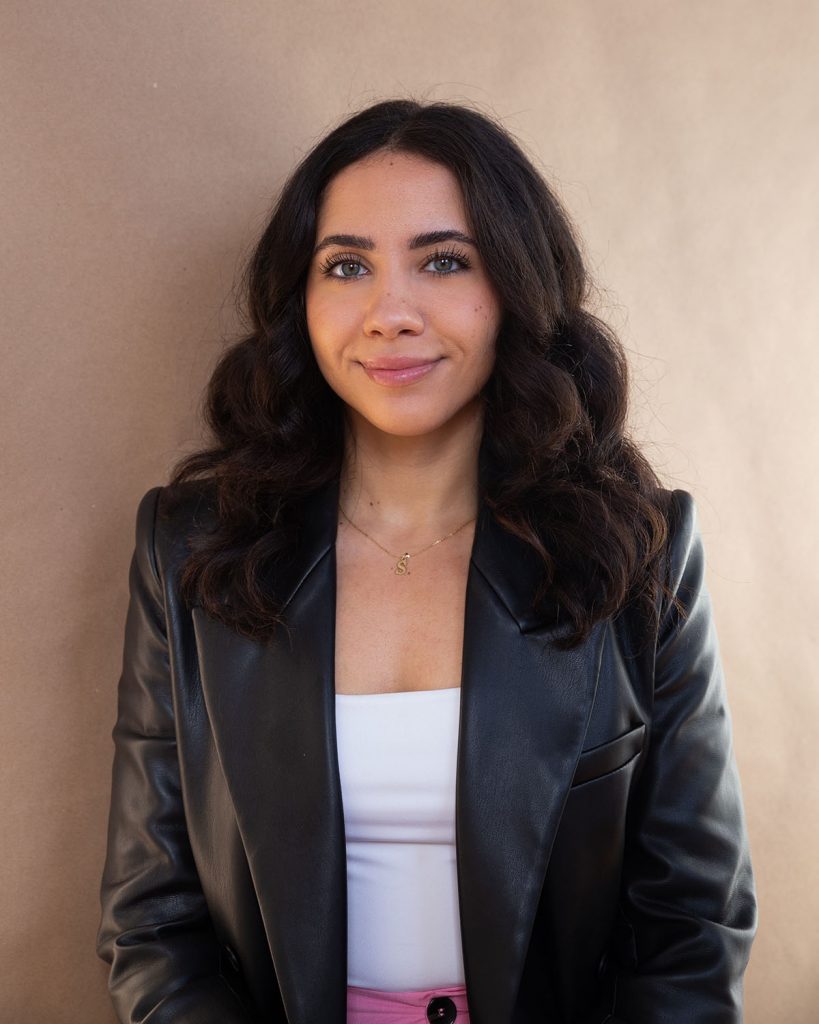 As Account Coordinator, Sandra is dedicated to maximizing her client work and is constantly learning. She supports PR activities for FAULHABER’s beauty and fashion brands – both personal passions – including media relations, curating influencer rosters, event planning and database management.

Sandra is passionate about maintaining a healthy lifestyle and is always welcoming mentorship opportunities to grow professionally and individually. Her background in customer service has given her strong personable skills, which she uses to strengthen relationships both internally and externally.

It’s no surprise that Sandra has Futuristic as one of her core strengths, as she is constantly setting new personal and professional goals. Her other strengths focus on Executing and Relationship Building, including Restorative, Consistency, Harmony and Individualist.

With a degree in Gender Studies, Diversity and Inclusion are extremely important to Erin. She lives and breathes all things social, and loves making TikTok montages and video content of her outdoor adventures. If she’s not jumping on the latest trends, you can usually find her creating graphics with her keen eye for design or recording her next podcast.

A strong Executer, Erin uses her strengths to deliver KPIs for her clients. Her strengths are Achiever, Belief, Discipline, Responsibility and Input. 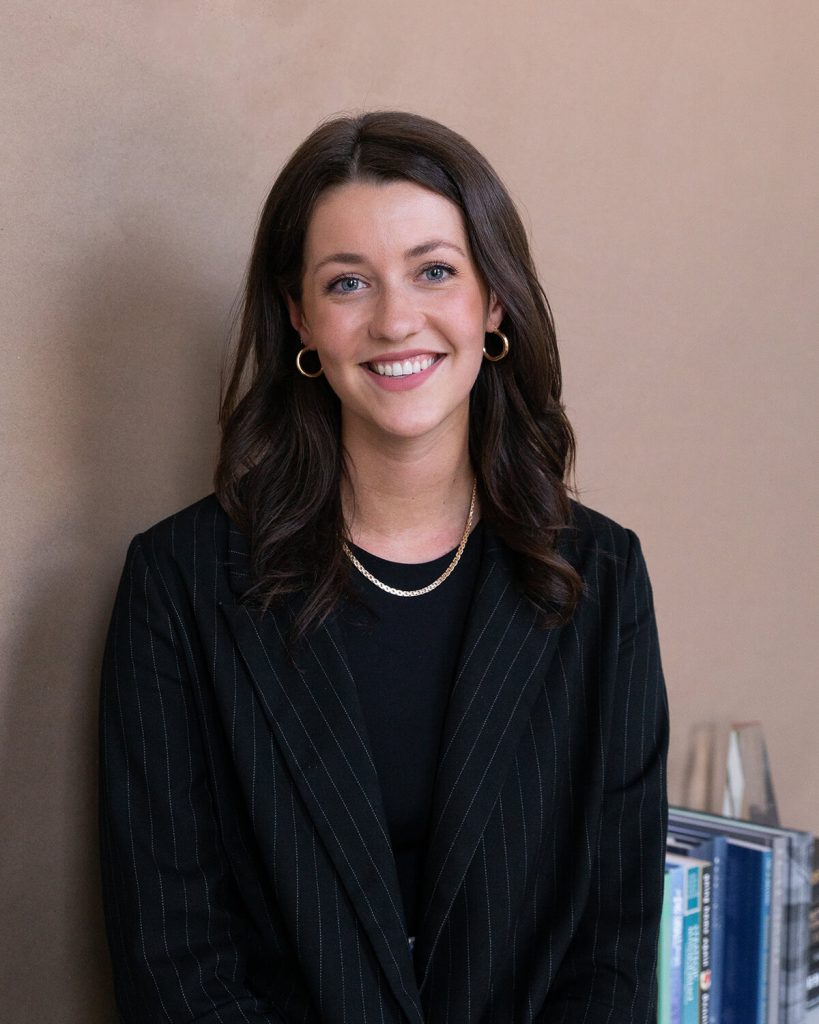 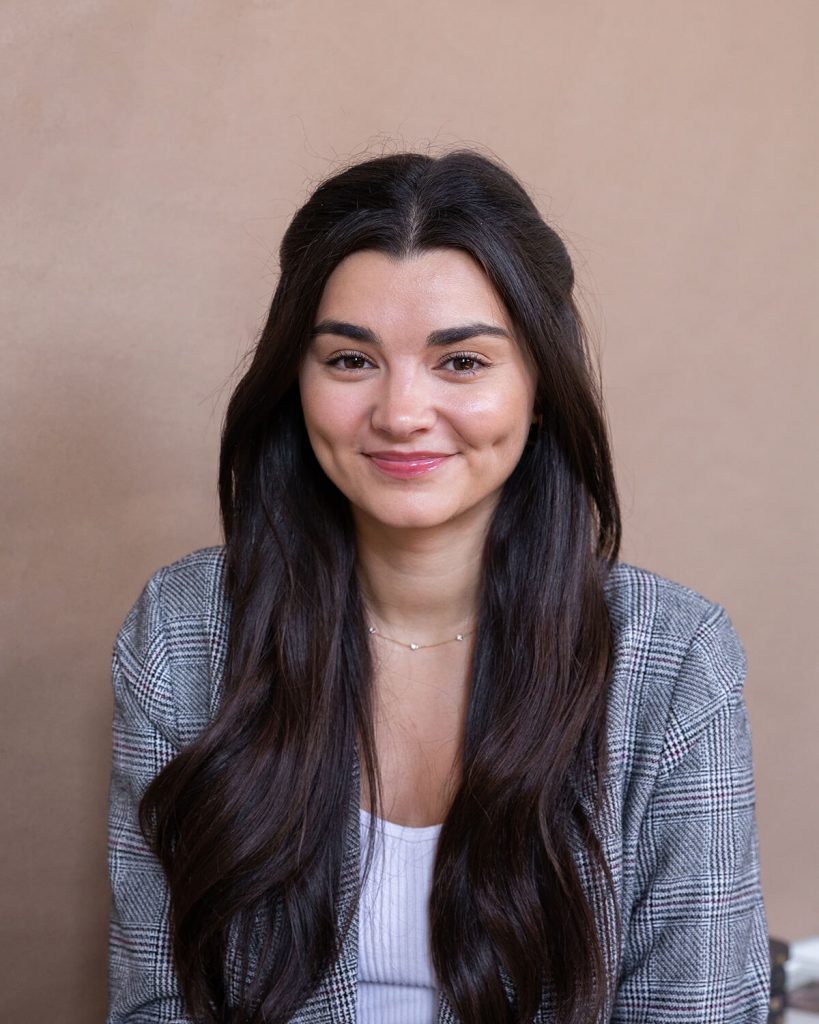 Rachael loves to travel, stay active through different workout classes (especially Pilates) and enjoys reading a good romance novel. She is a major foodie, always looking for new restaurants around the city.

Rachael’s Empathy, Harmony, Positivity, Futuristic and Individualization strengths all fall under Relationship Building and Strategic Thinking categories, which she uses to build relationships with new clients and influencer partners.

Faulhaber Communications is committed to evolving our business to ensure diversity, equity and inclusion are integrated into our agency DNA. We analyze how we do business, who we hire, who we work with, and what we say, to ensure it all contributes to the change the world needs now. FAULHABER is commited to long term sustained action-this requires time, effort and learning grounded in actual experience. We believe there is unity in diversity and that inclusive work environments allow people and our organization to thrive. Individuals have different unique abilities, and capacities but in an inclusive environment everyone’s strengths and contributions are encouraged, supported and leveraged.